The Election Commission of India on January 16, 2019 launched Voter Awareness Forum (VAF) in New New Delhi. Similar VAFs were launched by the Chief Electoral Officers in the state capitals and by District Election Officers in the districts simultaneously.

• The Election Commission has ordered all the respective nodal officers and agencies to immediately set up the forums and facilitate enrolment of all employees and officials on the electoral roll.

• The VAFs will facilitate members to check their names and details on the electoral roll through online NVSP portal of the ECI and the voter helpline number – 1950.

• The half-day briefing was conducted to familiarise the officers from various Ministries and Federations with the concept of voter awareness forum and to brief them about their role as nodal officers of the VAFs.

• Similar briefing sessions were held across the country by the Chief Electoral Officers and District Election Officers where nodal officers of departments, non-govt departments, CSOs, Corporate and media houses in the state and district were briefed respectively.

• The voter awareness forum is a part of the Electoral Literacy Club programme of the Election Commission of India.

• The ELC programme, which was launched on the 8th National Voters Day, January 25, 2018, envisages setting up of Electoral Literacy Club in every educational institution and Chunav Pathshala at every booth to cover those outside the formal education system.

• Around 2.11 Lakh ELCs have already been established across the country in the first year of the launch of the programme.

Besides this, Senior Deputy Election Commissioner briefed all present about the ‘Voter Verification and Information’ drive that the Commission is taking up. Further, while speaking on the occasion, Election Commissioner Ashok Lavasa said that thousands of unnamed and faceless government officials undertake the task of preserving the electoral process, in different capacities and roles.

Hailing the Officers as “Ambassadors of Democracy”, Lavasa said that as Nodal Officers, now they are invested with the additional responsibility of educating colleagues and staff in their workplace and ensuring that all the members of their Ministry and Departments are familiar with the electoral procedure right from enrolment to the casting of the vote. 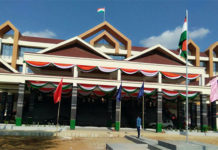 Arunachal: All ministers are crorepatis, but not one has pending criminal case