A man and his family, dressed up for his wedding in colourful traditional attire, stood in a queue outside a polling booth in east Delhi’s Shakarpur. Voter cards in their hands, the turbaned men in the family posed for a photo, while the women stood behind them.

They are among over a crore people in Delhi who are eligible to vote in the assembly election.  Voting will end at 6 pm.

People from all walks of life are coming out to vote in large numbers.

“Yes, I remember, they (polling officials) would take my thumb impression and then the ballot paper would be folded and put into boxes. I have voted with big machines (EVMs) too,” she said in an interview to news agency Press Trust of India.

The BJP, which won only three seats in the 70-member assembly in 2015, is looking to unseat Chief Minister Arvind Kejriwal’s Aam Aadmi Party (AAP) in the national capital. The BJP has run its campaign on the strength of Prime Minister Narendra Modi’s policies.

Over 1.47 crore voters will face the choice of re-electing the AAP or replacing it with the BJP or the Congress. The polling marks the end of a bitter face-off that saw exceptionally coarse language and communally-charged attacks.

Why Bihar is a hot potato in Delhi Assembly election 2020. 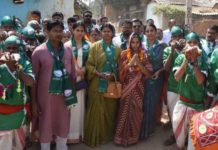