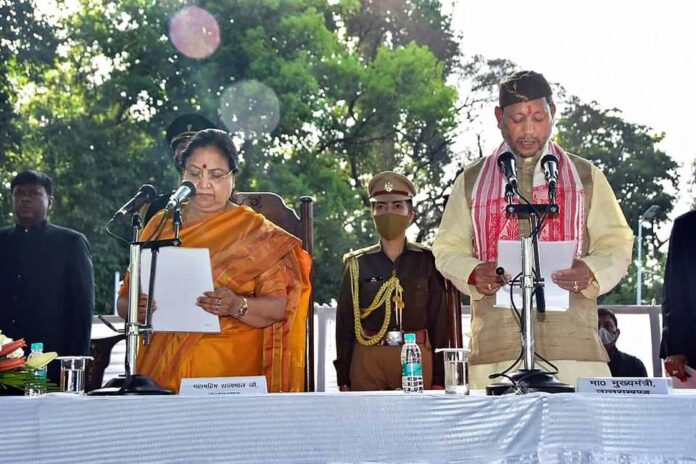 A long-time member of the BJP, Tirath Singh Rawat was the dark horse in the race

Garhwal Member of Parliament Tirath Singh Rawat on Wednesday took oath as Chief Minister of Uttarakhand at the Raj Bhawan in Dehradun after he was elected by the BJP Legislature Party. His predecessor Trivendra Singh Rawat resigned on Tuesday.

Speaking to journalists, he thanked legislators and party leaders for the opportunity. He asserted that he would “carry forward the work done by former Chief Minister Trivendra Singh Rawat.”

A long-time member of the BJP, Mr. Tirath Singh Rawat was the dark horse for the chief minister’s post, where the only thing clear was that the choice would devolve on a person from the Rajput community.

A low-profile person, Mr. Tirath Singh Rawat is considered very close to Union Home Minister Amit Shah and was his close aide during the latter’s vistarak programme of organisational strengthening in 2016-2017 held over a period of 120 days.

“In 2017, he was prevented from getting a ticket by a camp led by his predecessor after which Mr. Shah appointed him national secretary with the charge of handling party affairs in Himachal Pradesh. He was also given the prestigious Garhwal seat to contest from in the Lok Sabha polls, a sign that the central leadership felt he had been cheated out an Assembly ticket. He is the kind of man who doesn’t have an entourage of staff and most often answers his own phone,” said a senior leader.

It is being hoped that this, more low-key, amiable appointment may heal some of the ruptures within the State unit, which revolted against Mr. Trivendra Singh Rawat.

Sources said that one of the first things that the new Chief Minister has been tasked to do by the party’s central leadership is to roll back two unpopular decisions of his predecessor— that of the Chardham Devasthanam Management Board Act that sought to extend the government control over 51 Hindu shrines, including Badrinath and Kedarnath, sparking massive protests by the Vishwa Hindu Parishad and other Hindu outfits, and that of the setting up of the Gairsain Commissionerate, amalgamating Almora from Kumaon, and the Badrinath and Kedarnath sub-divisions from Garhwal, again sparking massive resentment.

Uttarakhand is facing polls in February next and while it is late in the day to be changing leadership in the State, the BJP is hoping that people may instead take the change as a sign that the party was responsive to public criticism of its leaders and had taken action.