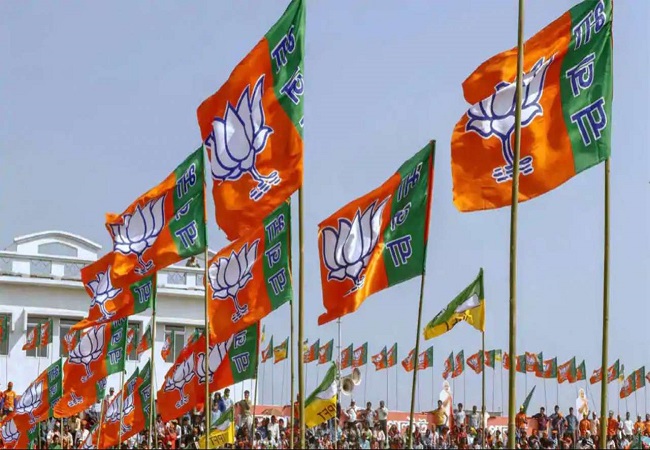 Congress, the main opposition party, won only 55 seats across all 6 local bodies. It had won 176 seats in the 2016 elections

The BJP on Tuesday swept elections to six municipal corporations in Gujarat by winning 483 out of 576 seats, while Congress, the main Opposition party in the state lost considerable ground to new entrants Aam Aadmi Party and All India Majlis-e-Ittehadul Muslimeen.

The ruling party retained power in all the six municipal corporations in the state — Ahmedabad, Surat, Vadodara, Rajkot, Jamnagar and Bhavnagar. The polls had been held on 21 February.

Congress got a drubbing, as it won only 55 seats and failed even to open its account in Surat.

On the other hand, the AAP put up an impressive show by winning 27 seats, all in Surat, and emerged as the main opposition in the Surat Municipal Corporation.

Congress, on the other hand, won seats in single-digit in three corporations and drew a blank in Surat.  The party won 25 seats in Ahmedabad, four in Rajkot,
11 in Jamnagar, eight in Bhavnagar and seven in Vadodara.

Three candidates of the Bahujan Samaj Party won in Jamnagar, while an independent candidate won only in Ahmedabad.

The BJP had won 389 seats and Congress 176 across these six municipal corporations in the 2016 elections. The saffron party gained 94 seats while Congress lost
121 seats this time.

Prime Minister Narendra Modi on Tuesday termed the victory “very special” and said for a party that has been serving in a state for over two decades to record such a phenomenal win is noteworthy.

He said the results of municipal elections clearly show the unwavering faith people have in politics of development and good governance.

Home Minister Amit Shah said, “Municipal corporation poll results show that Gujarat has again established itself as BJP’s stronghold. BJP continues to carry out the ‘vikas yatra’ started in the leadership of Modi Ji. Today’s results are one of the best results in Gujarat.”

The people of Gujarat have provided “a subject” to political analysts who can study how the concept of anti-incumbency does not apply in the state, he said.

“Many thanks and congratulations to all the winning candidates, BJP office-bearers, workers and the voters of Gujarat for the glorious victory of Bharatiya Janata Party in the elections,” tweeted Nitin Patel.

Celebrations were underway in the AAP camp as well.

Delhi Chief Minister and AAP convenor Arvind Kejriwal announced that he will hold a roadshow on 26 February in Surat, where his party registered impressive gains in the civic body polls.

In a tweet in Hindi, the Aam Aadmi Party (AAP) chief thanked the people of Gujarat for ushering in an era of “new politics” in the state.

“The people of Gujarat wanted an alternative and the AAP has emerged as a key alternative to the present parties. Now the upcoming Assembly election will be fought between the Aam Aadmi Party and the BJP,” the chief minister said.

His deputy Manish Sisodia also took to Twitter, saying, “The kind of love and support the people of Gujarat have shown, heartfelt thanks to each voter. All of us will work together towards ‘kam ki rajneeti‘ (politics of work).”

“We will raise public issues on the streets as well as in the Assembly. The people of Surat have done a great job. The people of Gujarat are upset with the BJP, they do not trust the Congress and the Aam Aadmi Party has emerged as their only hope,” he said in a statement.