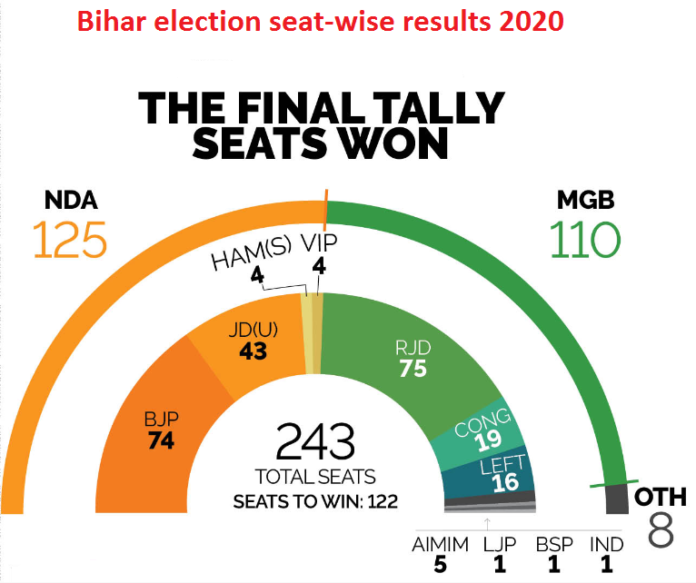 The Nitish Kumar-led NDA on Tuesday defeated the Tejashwi Yadav-led Mahagathbandhan in the Bihar Assembly Election 2020, winning 125 of the 243 seats and leading in two seats.

Based on the final election results available on the Election Commission’s website, the NDA has crossed the half-way mark (simple majority) required to form the government, whereas the opposition Mahagathbandhan won 11o seats.

Here is the full list of winners in the Bihar Assembly Election 2020:

The AIMIM of Hyderabad MP Asaduddin Owaisi has sprung a surprise, clinching five seats in the Seemanchal region having a large Muslim population. Its Grand Democratic Secular Front (GDSF) ally, the BSP, has pocketed one seat.

But the biggest surprise this election was the Left Parties – CPI-ML, CPI and CPI-M, winning a total of 16 seats. The Left parties had contested the election in alliance with the Congress and RJD.

Chirag Paswan’s LJP, which had walked out of the NDA just ahead of the polls and gone to the hustings alone, finally opened its account, winning just one seat. An Independent candidate also won.