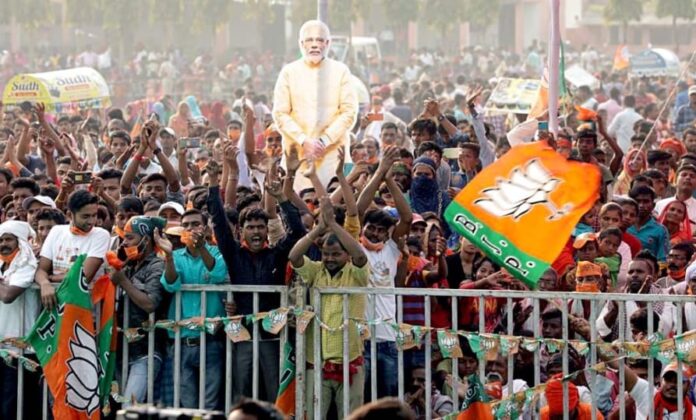 The BJP has won all eight Assembly seats in Gujarat that went to bypoll on November 3. CM Vijay Rupani has said the BJP’s performance in this byelection was just a “trailer” of the outcome to be expected in upcoming elections to local bodies and in 2022 assembly polls.

he ruling Bharatiya Janata Party (BJP) has bagged all eight Assembly seats in Gujarat for which the bypoll was held on November 3, as per the Election Commission. The Congress, meanwhile, drew a blank in bypoll in Gujarat.

As many as 81 candidates contested the bypoll across the eight seats — Abdasa, Karjan, Morbi, Gadhada, Dhari, Limbdi, Kaprada and Dang. All eight seats were bagged by the BJP.

BJP’s Pradhyumansinh Jadeja, one of the five turncoat MLAs of the Congress who had joined the saffron party after resigning earlier this year, on Tuesday defeated his nearest Congress rival Shantilal Senghani by a margin of 36,778 votes from Abdasa Assembly seat in Kutch district of Gujarat, the Election Commission said.

With the BJP winning all eight seats in Gujarat, party workers broke into celebration and burst firecrackers at the party headquarter in Gandhinagar.

Gujarat Chief Minister Vijay Rupani told reporters earlier in the day that the BJP’s showing in the byelection was just a “trailer” of the outcome to be expected in upcoming elections to local bodies and in 2022 assembly poll.

Gujarat CM Rupani said voters have rejected the “negative campaign and activities” of the Congress in Gujarat, Bihar, Madhya Pradesh and Uttar Pradesh.

“Today BJP has emerged victorious across the country, whether it is Bihar, Uttar Pradesh, Madhya Pradesh or Gujarat. This outcome is the result of the work done by Narendra Modi government and the support of people for the BJP,” the Gujarat CM said.

Hailing voters for exercising the franchise for the bypoll held on November 3 amidst the Covid-19 pandemic, CM Rupani said the constituencies were spread in different regions of Gujarat and consisted of areas dominated by Muslims, Adivasis, Kolis and Patidars among others.

“In all these areas, the BJP has received a huge lead. The BJP bagged more votes than the Congress everywhere. As I had said earlier, this election will prove to be the last nail in the Congress’ coffin,” CM Rupani said.

He said Gujarat will continue to remain a BJP bastion where the Congress has recorded its worst-ever electoral performance.

The bypolls in Gujarat were necessitated after sitting Congress MLAs resigned ahead of Rajya Sabha polls in June this year. Five of them then joined the ruling BJP, which fielded them from the same seats they had won in the 2017 elections. As many as 81 candidates contested the bypolls across the eight seats.